As part of the international campaign, Animal Friends invites to the protest in front of the Zagreb ESCADA store

- Animal Friends continues their "For Croatia without Fur" campaign

The name ESCADA goes back to the name of a beautiful Irish horse which the fashion company ESCADA features on their website; to a horse which didn't want to be reined, didn't want to be dominated. The Global Network Against the Fur Industry and Animal Friends who join their activities ask how ESCADA, in the face of such fascination with an animal which wanted to keep its freedom, can be involved with something so ugly as the violent use and destruction of thousands of other individuals, so-called fur animals.

Countless minks, foxes, raccoons, chinchillas, rabbits and many other animals are kept imprisoned in cages for months. They are finally killed by being gassed or electrocuted. Other animals are trapped. To deny the obvious ability of these animals to suffer and to be injured and the violence perpetrated against them in fur production has long been a strategy of the fur industry, and ESCADA is still a part of this shameless fur trade.

At first place it is the fur sale which decides whether the business of fur is lucrative. ESCADA is involved in several stages of this process: designing its own collections, producing them in its own factories, and selling them exclusively in its own shops, or in shop-in-shops and concessions in department stores. The fashion house ESCADA therefore bears a share of the responsibility for the continued and completely unnecessary bloodshed of sentient beings.

The ESCADA array of products ranges from designer women's fashion (business, evening dress, sportswear), through to children's clothes, accessories and perfume. The ESCADA Group has a subsidiary company called Primera, which in turns owns the labels apriori, BiBA, cavita and Laurèl. Fur items are part of their collection: e.g. jackets and trimmings made from real fur.

Animal Friends will hold a peaceful protest in Zagreb so as to urge the ESCADA management to completely withdraw real fur from its stores for the animals', environment's and their reputation's sake. The protest will take place on Friday, November 30 at 12 noon in front of the ESCADA store in Gunduliceva ulica 15. This is one of the many protests that will simultaneously take place in Europe and the United States these days.

The same day, at 5 P.M. Animal Friends will start showing the video projection "Cruelty by Design" – which will be repeatedly played until 7 P.M. At the same location on Saturday, December 1, at the Animal Friends' info stall Zagreb people could get more information and printed materials.

With a withdrawal from the fur trade ESCADA could prove compassion towards animals and its ecological awareness and stand together with those who are not ashamed of saying that there is nothing elegant in fur clothing, nothing glamorous about it, because violence can never be aesthetic and beautiful. 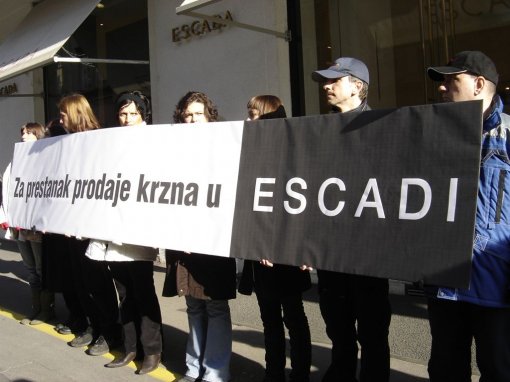