- The association has sent letters and reports to the president of the state, relevant ministries, the Government, inspectorate...

A recent disclosure of the horrific treatment of dogs in Romani settlements, in Medimurje County, revealed an alarming situation and a necessity of providing the emergency assistance for both the dogs and the Romani. They are particularly exposed to the most monstrous torture and mutilation in Pribislavec and Kursanec settlements, where a large number of dogs suffer in dogfights. Although a part of the public expressed anger towards the Romani, the fact is that the existing situation is a result of all those people from the cities who leave unwanted dogs close to the Romani settlements as well as of those who kept silent, not undertaking anything, until Kristijan Balog, a chairman of the Association of Young Romani in Međimurje, revealed a shocking footage of dog torture.

Animal Friends have visited one of the Romani settlements, in Međimurje, which is considered to be in the best situation when it comes to the treatment of animals, and they were astonished by the poor conditions and the scenes of the pack of uncastrated and sick dogs both in the streets and around every house. Children are hitting the dogs and the locals do not have a basic knowledge and information about the treatment of animals. The scenes that seem to belong to some other time and country are perplexing, and anyone can testify that the dogs and the people need a quick and concrete assistance.

Animal Friends have sent a report to the Ministry of Agriculture and other relevant ministries, the Government, veterinary inspection, District Attorney's Office, Police Department and the president of the State, Kolinda Grabar-Kitarovic, seeking to urgently address the problem of abandonment, neglect and ruthless forms of torture of dogs in Romani settlements in Mediimurje County, which has been around for years. It is emphasized that this is a very complex problem and the solution requires persistence, durability and engagement of experts from various fields, not just of those related to the animal protection.

The Association believes that between 2,000 and 3,000 abandoned dogs are not microchipped, that they are unvaccinated, reproduced uncontrollably, and that there is a significant number of abused animals. This is a big problem that requires the involvement of all institutions and the whole Croatia. It is necessary that the matter is discussed and on the agenda of the Government and the Parliament, as well as that the Ministry of Interior Affairs, Ministry of Social Policy and Youth, Ministry of Science, Education and Sports and other institutions also get engaged with that, because the situation is completely disconcerting.

While doing so, any dog must never get hurt because the unfortunate dogs already paid a very high price of human negligence. The shelter for the abandoned animals in Cakovec receives almost exclusively dogs from the Romani settlements, and they are at full capacity because of the animals which are coming in very poor condition: traumatized, tortured, hungry, neglected, sick, trampled... Each new animal is in a worse shape than the previous one, which shows that they are constantly exposed to violence. Dogs from the Romani settlements that are currently being treated by veterinarians, suffer from deep infected wounds from a chain around their neck, fractures, hypothermia, inflammation, infectious and parasitic diseases, starvation, scabs and skin damage...

Nevertheless, torturers and animal murderers, as well as dog fight organizers from these settlements, are not sanctioned in any way, which encourages them to behave as if the laws, that are equally implemented throughout Croatia, do not apply to them. Children openly harass and beat animals, because they do not know any different way of behaviour.

The local and national authorities need to show how to treat animals by their own example, and to focus on finding solutions for animal abuse by punishment and a systematic education of the population, especially of children and youth, about the compulsory microchipping, castration, vaccination, dog-care, and responsible behaviour towards them. Animal Friends believe that it is important to act now and not to allow the situation to get any worse, which is possible only through an investment of specific financial and human resources. 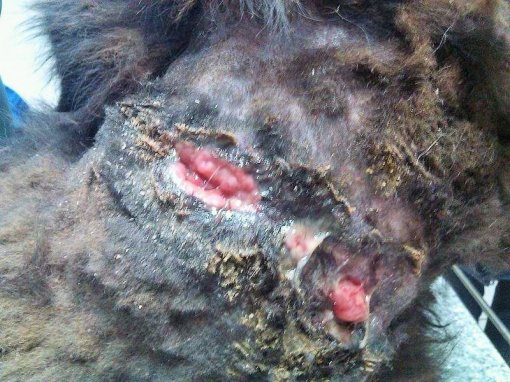