Design Against Fur, the international student design competition with a conscience, and Animal Friends are delighted to announce to the Croatian public the winners of the 2008 European & International region of the competition.

Student Marin Mimica helped Tomislav Stancic in creating the winning artwork. In addition, 11 students were awarded a Special Commendation from the judges and a further 13 students received Commendations. Students from Australia did especially well, securing 10 awards out of a possible 28. All the winning artworks can be view at: www.inFURmation.com.

The student designers were briefed to produce a pro-animal protection message, focused on the cruelty involved in the use of real animal fur. Over 65 million animals are slaughtered every year for their pelts, the majority of which are turned into frivolous fashion clothing and trinkets.

From October 13-17 Animal Friends will organize an exhibition of all 40 artworks from Croatia in the Student Center, Savska cesta 25, Zagreb. Awarding of Commendations and Certificates will take place at the press conference at the same place on Tuesday, October 14, at 11 A.M.

Commenting on this year's competition, Design Against Fur European & International organiser, Shely Bryan said: "The European & International round of the competition goes from strength to strength, with over a thousand entrants from over 50 countries. It truly is an international competition. I congratulate all the students who took part, and their tutors, and thank them for using their considerable design skills to communicate a strong message – fur is cruel, do not buy it, do not wear it."

Commenting on the winning design, Ivana Surjan, from Animal Friends, added: "I think Tomislav's winning artwork is excellent and I congratulate him on winning first prize. This is the first year we have been involved in the competition, and so we look forward to receiving even more entries from students for Design Against Fur 2009! Details can be found on our website: www.prijatelji-zivotinja.hr and at www.designagainstfur.com."

The top three European & International winning entries will now go forward to be judged, alongside the winners from the other Design Against Fur regions (China, North America, Russia and UK & Ireland) for the Grand Prize.

The same artworks will also be submitted for the People's Choice Award, an online public vote. To vote for your favourite winning design (voting available throughout November) go to: www.designagainstfur.com.

Details of the 2009 competition – open to all students throughout the world – will be available from September at: www.designagainstfur.com and www.prijatelji-zivotinja.hr. 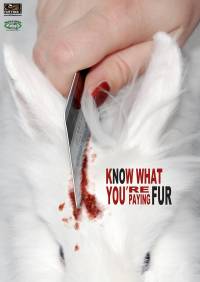