11/10/20 Don't kill animals because of the coronavirus, ban fur farming!

Animal Friends Croatia, horrified by the slaughter of 17 million mink in Denmark, again reminded of the necessity for a ban

- Wearing of fur cannot be a justification for keeping animals in cages, their slaughter, and the danger of pandemics

The news that a mutated form of the coronavirus which spreads to humans has appeared on Danish mink farms made headlines around the world, as it could diminish the effectiveness of future vaccines because, even though it does not cause severe cases of COVID-19, the antibodies do not attack it as strongly as they do the regular coronavirus strain. Animal Friends Croatia responded strongly to the announcement that Denmark, the world’s biggest mink exporter, will therefore slaughter more than 17 million of these animals, “Danish authorities are ordering the slaughter of a huge number of animals in an attempt to prevent the spread of the mutated virus across borders, while what they should have done a long time ago is introduce a complete ban on the disgusting mink fur production and cruel deaths of animals for a triviality such as fur-wearing, and to guide mink producers to different, more humane endeavors.”

In addition to Denmark, SARS-CoV-2 has also been discovered on mink farms in the Netherlands, Spain, Italy, Sweden, and the USA. In previous months, these countries have culled millions of mink, but this did not manage to stop the spread of the virus. “It is absurd that countries where mink farming exists still think that the solution is to continually kill all animals on farms and then continue breeding them for fur. It has been clear from the start that the new coronavirus is connected to humans’ animal exploitation and consumptive treatment of nature. Farms overcrowded with animals are the perfect breeding ground for the growth of more virulent virus strains and pose an unnecessary risk. All EU states should follow the example of Croatia and many other countries, and ban breeding of any animals for fur, both due to ethical reasons, but also ecological, as well as for the sake of public health,” Animal Friends Croatia stress.

They remind us that last year, on a “horror farm” of a mink breeder in northwestern France, cages with wire undersides were found full of dead and languishing mink dying in agony and terror, surrounded by feces and decomposing bodies. Newborn and adult mink were crawling over corpses which were torn apart, some even mummified, and newborn mink were dying, stuck under their family members’ corpses. For more than a decade, on farms where animals are bred for fur, animal protection associations in Denmark have been documenting animals with open wounds, exhibiting stereotypical behavior and cannibalism, and all this for the sake of the production of luxury coats.

“Millions of animals spend their short miserable lives captive in small wire cages, where they develop routine stereotypical behavior such as repetitive motions and movement in the cage, refusal of food, self-harming, attacking others (visible bites on the coats, wounded or missing ears, gouged eyes, tails bitten off). Painful wounds and deaths are the results of boredom, stress, overcrowding, inadequate diet, and noise. Daily operations on fur farms in Denmark, Finland, France, and elsewhere have shown it impossible to achieve conditions adequate for farmed animals’ welfare, as an improvement of conditions would not be economically viable for the breeders, and the only solution is to completely stop the callous exploitation of animals for fur”, Animal Friends Croatia conclude.

Precisely because of animal cruelty, pollution, and the threat to human health, which are inherent parts of fur production, in 2006 Croatia introduced a justified and laudable ban on fur farming, which entered into force on January 1, 2017. Fur farming is also banned in Great Britain, Austria, North Macedonia, Slovenia, Serbia, Luxembourg, the Czech Republic, and Germany, while Belgium, the Netherlands, Slovakia, Norway, and some other countries have a ban in place with a phase-out period.

Animal Friends Croatia believes that this significant threat to humans, associated with the farming of animals for fur, will also speed up the process of legal prohibitions of fur farming in all member states of the European Union, as well as in the rest of the world. This would bring an end to the merciless killing of animals, as well as stop pollution, unnecessary depletion of natural resources, and the rise of new pandemics. 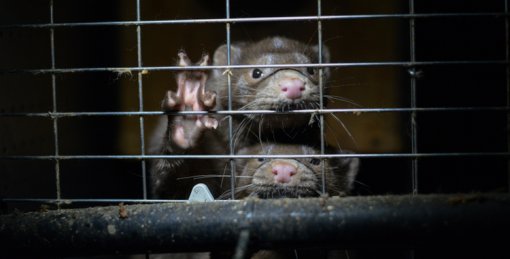