The most recent advertisement of Lura - "We Understand Nature" is the best proof that the Croatian companies shrink from no means in advertising their products. Following the example of their western colleagues that have for years been convincing us of the existence of "violet cows" that walk contentedly over the pastures and just wait for us to squeeze their swollen udders, from which healthy milk will gush forth and turn into delicious chocolate, the Croatian minds are trying to feed us new (old) fairy tales.

Indeed, nobody would be happier than us if the cows presented in Lura's commercial really looked that healthy and contented, living in spacious, airy stables and eating plenty of ecologically healthy hay. And if the baby calves, at the invitation of their mother or whenever they want, could suck the healthy mother's milk with pleasure. Indeed, nobody would be happier than us if Lura really understood the nature, because the advertisement in dispute presents an idyllic description of conditions in which the cows and their calves should live. However, the greedy magnates turned those conditions into an unrealisable utopia.

Animal Friends does understand nature. Therefore, on Thursday, May 15 at 12 noon, it will organise a public protest at Ban Jelacic Square against Lura's advertisements that falsely present the dairy industry, and in that way they will warn the public of the danger lurking from the milk and dairy products, as well as of the horrible suffering that the animals experience in the dairy industry.

What else did Lura try to achieve with the mentioned advertisement, except throwing dust into consumers' eyes, when we talk about the conditions in which their "milk production machines" are raised and kept? Is it possible that it tried to delude us how milk is healthy and necessary for us and our children? Let us not argue about that any further, but take a look at the following facts, because the real truth looks like this:

MILK IS A KILLER AND TORTURER OF ANIMALS

People do not express any gratitude whatsoever to the cows for the milk they provide them with, which the nature did not intend for them. We squeeze them and torture them all their lives filled with pain and suffering, and eventually slaughter them brutally, when they are no longer capable of giving milk.

Most of the cows on mass milk production farms live no more than 2 to 4 years. They die in great pains of the udder inflammation caused by the way they are milked, by the hyper-production and the way they live on those farms. Milk and dairy products are non-human and they are completely unnecessary.

In order for the milk, cheese, butter and yoghurt to be produced, the cows undergo annual forced pregnancies. When the calf is born, the strong connection between the cow and her newborn is broken after several days already; the calf begins to receive a substitute for mother's milk that it would otherwise feed on for 6 months. The cow has to produce 10 times more milk than her calf would have drank, and this milk is left for milking, whereas her calf feeds on milk substitutes.

The calf is separated from the cow when it is only three days old in order to prevent it from drinking too much milk and in order for it to get used to the substitute as soon as possible, because we need its food. Hundreds of thousands of calves are separated from their mothers every day, because we have to satisfy our unnatural and unhealthy desire for cow's milk. They will end up in slaughterhouses anyway, after several months of intensive fattening.

MILK IS A SQUANDERER AND ENVIRONMENT POLLUTER

It takes a lot of natural resources to produce animal milk, as well as a lot of food that is wasted, a lot of energy and effort. Although seemingly cheap, milk is an expensive food subsidized by the state in order to be cost-effective. In addition to the food, the farms spend a large quantity of water and pollute the environment a great deal.

MILK IS AN UNHEALTHY FOOD

Although many campaigns, because of the financial power and influence of the milk industry, talk about the significance, necessity and benefit of using the milk in our diet, the truth is quite the opposite. Milk is not only unnecessary, but also bad for our health. Many diseases, like arteriosclerosis, allergies, rheumatoid arthritis, juvenile diabetes, sideropenic anemia, neurological diseases, some types of cancer, as well as many other diseases are related to the consumption of cow's milk. Even in case of the prevention of diseases like osteoporosis, for which the calcium from the milk is considered necessary, it is not really exploitable because of the proteins in milk. There is also the lactose intolerance due to the natural lack of the lactose enzyme that the body produces only because of the continuous milk consumption. One should also mention the dangers like cholesterol, bacteria, viruses, hormones, pesticides and many others lurking from the milk.

MILK IS AN UNNATURAL FOOD

Man is the only mammal that drinks milk as an adult. None of the animal species in the nature drink milk as adults. Milk is intended for the raising of their young, therefore the calf sucks on the cow, the puppy sucks on the bitch and the human baby sucks on its mother.

Every departure from these two facts leads to an unnatural state and consequences.

MILK IS AN UNNECESSARY FOOD

Giving up milk has never been more popular. According to some information, as much as 31% of people are trying to reduce the consumption of dairy products in the Great Britain. 13% never or almost never eat dairy products, and 22% regularly use alternative non-dairy products, such as soy milk, rice milk and oat milk, nut milk, soy cream and soy cheese, as well as various types of nut cheese, that are not only less expensive to produce, but also exceed the taste of animal secretions by their rich flavour.

Because of numerous misapprehensions and conventional misinformation on the quality and benefits of cow's milk, why don't you search for more information on milk and numerous photos of the "idyllic" raising of dairy cows? 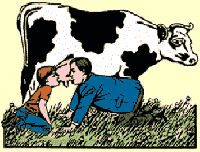