- The activists handed out a protest letter to the Norwegian ambassador, rallies all over the world

Animal rights activists and Animal Friends gathered today in front of the Norwegian Embassy in Zagreb to give support to NOAH, the biggest animal rights organization in Norway, and to help stop the mass cull of wolves which started in October last year and will last until the end of March this year or until all the wolves within the quota have been killed.

The peaceful demo in Zagreb, during which Animal Friends handed out the protest note to the Counselor and Deputy Ambasador of the Norwegian Ambasador Astrid Versto, is just one of many rallies of support to NOAH and Norwegian wolves, taking place in front of Norwegian embassies and consulates on January 19/20, 2018 all over the Europe and the world. More than 5000 protesters are expected to participate in the demonstrations in Norway.

This year's hunt is the worst we have witnessed since the wolf was protected in Norway in 1973, because of its scale and lack of any proof of necessity or justifiability of the hunt. The government of Norway has decided to kill altogether 42 wolves this winter, which means that 75% of the wolf population found on Norwegian territory will be wiped out. It is also the first time that the wolf is persecuted within the zone where it should enjoy strict protection. So far altogether 17 wolves have been shot dead during the licensed hunt this winter – this makes around 30% of the Norwegian wolf population and the number is still rising.

Animal Friends Croatia opposes to such extinction policy that is aimed at keeping the wolf population permanently at a critical level and as weak as possible. This policy is orchestrated by certain political groups in the Parliament, heavily influenced by the lobby of hunters and landowners. 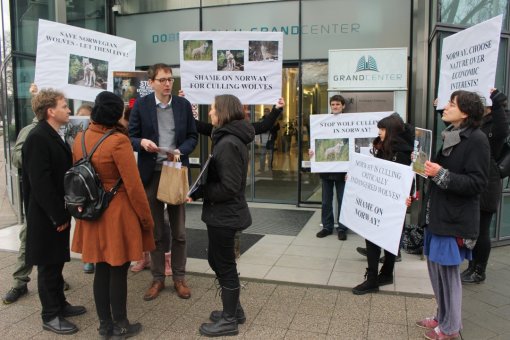