Although humans think of themselves as civilized and advanced species, every year during winter the months, starting from the last weekend in November, homesteads all over Croatia show their pride of their primitive and shameless custom of home slaughter or pig slaughter. The process of slaughter is the most brutal act in a relationship between man and animal, hence in Croatia it is promoted as an opportunity for entertainment, presenting the very act of slaughter with the humorous image of the partly slaughtered pig that is being chased by its butchers in the blood-drenched backyard.

Pigs are very social, devoted and sensible animals, whose high intelligence amazes scientists. They dream, recognize their own names, have long-term memory, learn "tricks" like sitting to get award and have social behaviour of such complexity earlier noticed only in primates.

While people would not slaughter dogs, pigs who are more intelligent than dogs, although this does not matter, are being slaughtered by having their throats sliced and left to bleed to death, at full consciousness. With a nervous system almost identical to humans, pigs are aware of the knife and feel intensive pain just as humans do. When we become indifferent to suffering of other creatures and lose respect for life of an animal, we also lose respect for life of a human.

In order to show the apathy towards animals who also have families and want to live, this year Animal Friends will show in Varazdin on the city’s "korzo" near the city Hall on Friday, November 25, at 12 noon a performance of the agony in home slaughter during which one of the activists will be "slaughtered and hanged upside down so as to bleed to death."

According to the Animal Protection Act, pigs are not allowed to be slaughtered without stunning, while penal provisions for those who break the law are from 10,000 to 15,000 kuna. Despite this speciesist regulation which only minimally reduces an animal’s pain, home slaughters during which the animals are being harassed, often disregard hygienic rules and thus the risk of spreading trichinosis is increased.

Slaughter is a brutal act and there is no such thing as humane slaughter. An ethically conscious society and individual are the ones who strive for compassion and a non-violent diet. In abundance of foodstuff of plant-based origin, it is ethically unacceptable to cause countless screams of dying animals and stuff ourselves with their remains, leaving the shameless cultural heritage to our kids.

Therefore Animal Friends invites the Croatian citizens not to take part in the slaughter of living beings but to think about switching to an ethically and ecologically acceptable vegetarian or vegan diet, which also would be a much healthier choice. 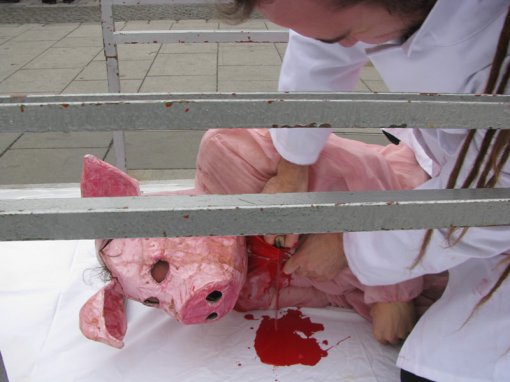 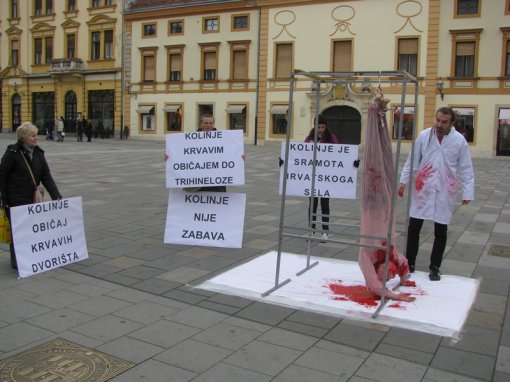 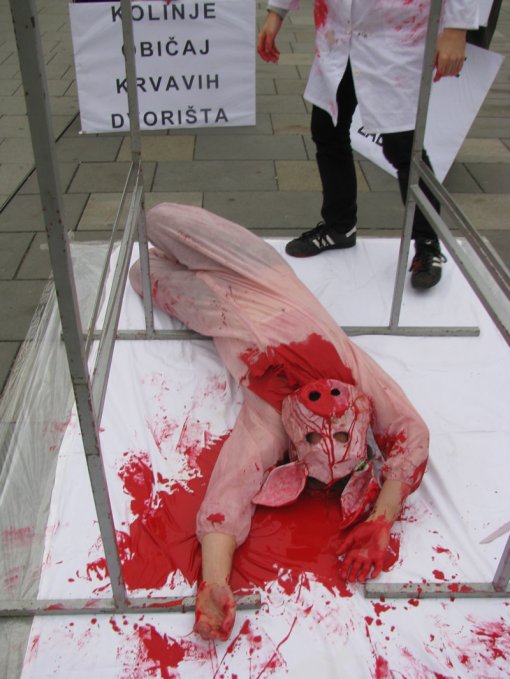