This year, a record 400,000 people pledged to go vegan as part of the Veganuary campaign

In 2019, 250,000 people from all over the world signed up for Veganuary, and this year the campaign broke a new record with as many as 400,000 signed. This increasingly popular international campaign began in 2014, and since then has been gathering people who pledge to eat a vegan diet for a month. Year after year, the number of participants has been growing rapidly, with applications coming from all over the world.

A large number of people who did not sign the oath are also believed to be taking part in the action with their daily vegan choices, and many participants are expected to continue with their plant-based diet even after January. Manufacturers, shops and restaurants are expanding their range of vegan products and meals, thanks to not only vegans but also those who seek to reduce their consumption of meat, milk, eggs, and honey, and have realized that vegan products are for everyone, regardless of their diet.

The Croatian version of Veganuary, called the Vege Challenge, run by the Animal Friends Association, is also breaking records this year. Applications are sent through the website www.veganopolis.net all year round and in January the number of applications increases. This year in January, there were four times more pledges than last year! At the end of the last year, Croatia was even named the 30th most hospitable vegan country in the world, according to the Global Vegan Index.

Veganuary spokesman Tony Vernelli said an increase in the number reported in 2020 was expected, given people's increasing awareness of the impact of animal breeding on climate change, but that the final number of participants still exceeded their expectations.

This January, hundreds of new vegan products have been launched in the United Kingdom alone, including meatless options at KFC, McDonald's and Burger King, and demand for them is far higher than expected. KFC sold one million vegan burgers in the first month, while delivery company Deliveroo announced that the number of vegan food orders has increased by 78% over last year.

This dramatically increased interest in a vegan diet is not surprising, given the growing awareness of the need for switching to a plant-based diet to preserve the planet. In addition, records of animal suffering are increasingly present on social networks, thanks to the growing number of activists and organizations. Furthermore, almost every week, new research into the harmful effects of animal consumption and the benefits of a plant-based diet on human health is emerging.

This year's Veganuary Ambassadors were: Joaquin Phoenix, Alicia Silverstone, Mayim Bialik, Evanna Lynch and others who, like many of their colleagues, live on a vegan diet and promote a compassionate, environmentally friendly and healthy lifestyle, using their reputation to spread veganism as a common good.

In addition to the fact that there are more and more vegans among celebrities such as actors and singers, this lifestyle is becoming more and more prevalent in the world of sports. The documentary “The Game Changers”, which came out late last year, opened the eyes of many and showed them that professional athletes on plant diet are more successful, and that vegan diet can help all those who are active in sports.

Whether your motivation for switching to a vegan diet comes from environmental concerns, compassion for animals, or a desire for better health, Animal Friends invite everyone to join the thousands of people who have already accepted the challenge. "You have nothing to lose, and a lot to gain," the association said, pointing to a month-long Vege Challenge found at www.veganopolis.net. 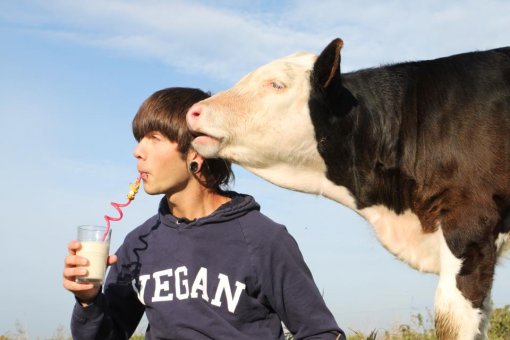