A 15-meter veggie sandwich for the World Vegetarian Day

- On October 1, Animal Friends Days will begin at Trg bana Jelacica with a 15-meter veggie sandwich and a veggie challenge

After the great success of the last year's 10-meter veggie hot dog, Animal Friends is preparing a new attraction for World Vegetarian Day.

On Tuesday, October 1, 2013, at 12:00 noon, at Trg bana Jelacica in Zagreb, Animal Friends will entertain visitors by producing a sandwich over 15 meters in length, which will be there for everyone to taste, and the person who guesses the exact length of the exhibited sandwich will win a valuable reward.

The sandwich will be made of veggie salami and sausages, as well as the tasty new sauce marked by the European V-Label. In order to encourage people to reflect on the ethical, ecological, health-related, and humane benefits of a vegan lifestyle, activists from Animal Friends will distribute information and free printed materials, and visitors will also have an opportunity to sign a petition for introducing vegetarian meals into public institutions.

On October 1, Animal Friends will also launch a Veggie Challenge, inviting everyone to become vegetarians, or preferably vegans, on November 1, World Vegan Day, and the most dedicated people may win surprise gifts. In order to facilitate their shift to the new principles of nutrition, they will have many recipes at their disposal, as well as cooking workshops and the individual assistance of Vegan Buddies, who have been experienced vegans for many years and will gladly help. Submissions at www.prijatelji-zivotinja.hr.

Ever since 1977, October 1 has been celebrated all over the world as the World Vegetarian Day. Besides being sustainable, plant based nutrition is healthy and tasty. According to the recent public polls, meatless nutrition is practiced by more than 150,000 Croats, as many as 86% of Croatian citizens support vegetarianism, while almost 30% state that they may become vegetarians themselves. The great popularity of vegetarianism in Croatia and abroad is also a result of scientific research, which has confirmed that vegetarians, and even more vegans, are healthier, more vital, and more long-living at the average.

On the World Day for Farmed Animals, October 2, 2013, at 7:00 P.M., Animal Friends will screen the synchronized short film "10 Billion Lives" at Trg kralja Tomislava in order to draw public attention to the tremendous number of cows, pigs, chicken, and other sentient beings that are killed annually on farms and in slaughterhouses around the world, suffering because of human choice. This date has been set up by the Farm Animal Rights Movement (FARM) and coincides with the birthday of vegetarian Mahatma Gandhi. The agony of farm animals and their violent death in slaughterhouses, as well as the devastating effect of animal breeding on the environment, are among the additional reasons to choose the vegan lifestyle.

On October 4, 2013, the World Animal Day, from 9:00 A.M. until 6:00 P.M., numerous animal protection associations from various parts of Croatia, involved in various aspects of animal protection and animal rights, will present their work at Trg bana Jelacica in Zagreb. The visitors will be able to obtain the so-called white list of companies that do not test on animals, as well as other info materials at the info stalls, where the activists will also inform them about various ways they can help animals. World Animal Day has been celebrated since 1931, and is also the feast day of St Francis of Assisi, who was vegetarian himself.

On Saturday, October 5, 2013, from 10:00 A.M. until 6:00 P.M., everyone is invited to celebrate the World Animal Day at Bundek Lake, organized by the Zagreb City Office for Agriculture and Forestry, with the other participating associations.

These important dates should be marked by personal activism in order to help abolish the exploitation and suffering of animals, and by changing one's own personal habits to participate directly in creating a better world for all animal species. There are many ways in which we can help animals and become their true friend.

More information at: www.prijatelji-zivotinja.hr and www.vegan.hr. The short film "10 Billion Lives" can be viewed at www.youtube.com/afcroatia.

The new sauce with the V-label is the Omegol sauce, which will soon be available on the market. It is intended for everyone and does not contain ingredients of animal origin. The gifts will consist of tasty Oatley's oats milk and oats sour cream, as well as other vegan products from bio&bio stores.

Animal Friends' actions have been sponsored by Omegol and Biovega. 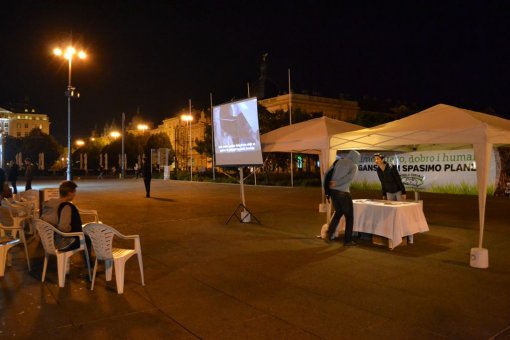